Jacob is 10 years old. He is a happy strong boy who fully enjoys his life.
Jacob has a mitochondrial disorder, which means that the mitochondria in each cell are failing. Mitochondria create your body's energy. To have compromised mitochondria impacts your life in many ways.

Jacob was born on January 31st, 2006. Everything seemed normal at birth and during the first months.
At 2,5 months, we realized something was wrong. Jacob had crying spells lasting for hours, and he didn't grow. He was diagnosed with lactose intolerant and we switched to a non-lactose formula. It didn't help, and he got hospitalized due to Failure to Thrive. After a long hospital stay, we got the diagnosis of severe reflux. We thought we had found Jacob's source of pain.
Jacob continued to not grow despite him being treated for reflux. Jacob got hospitalized again at 4,5 months. The biggest discovery was that Jacob aspirates. This led to Jacob having a g-tube surgery and nissen surgery (for the reflux). The g-tube makes it possible for Jacob to get his food straight into his GI system for digestion, but he doesn't have to swallow. We were first scared to learn all about the g-tube and what it would do to Jacob's life. 3,5 years later, we can only say that the g-tube is a true blessing. This is the only way Jacob could have had the steady growth he has had these past years. During the hospital stay, we also found out that Jacob's brain has abnormalities including an underdeveloped corpus callosum leading to Jacob having global developmental delays. This was a very hard piece of information to digest for both Joakim and me.
We were happy after the g-tube surgery - finally Jacob was growing. We finally had some piece of mind. Unfortunately, the nissen surgery failed and we had to redo the surgery 2 months later. Each surgery for Jacob always take a big toll on him, and the recovery is always long.
The fall of 2006 was a bit more stable for Jacob. He even passed the swallow study on puree, and could start enjoying the flavors of baby puree!
Shortly after Jacob turned 1, he started having seizures. This was again a true set back, and another thing we had to manage as part of Jacob's care. As he grows, we constantly have to increase his medications in order to avoid breakthrough seizures.
Year 2007 was an intense year keeping the seizures under control. We had many ambulance rides to the hospital this year. Jacob was also diagnosed with a severe case of sleep apnea. He stopped breathing on average 16-17 times/hour, and is oxygen dependent at night after that.
In 2007, Jacob got diagnosed with probable mitochondrial disorder after having had a muscle biopsy performed. This means that the mitochondria in his cells are failing. The mitochondria are what makes the cells create energy. This makes it very hard for Jacob to get through his day. He is constantly living on the edge, and his failing energy levels makes it very hard for Jacob to breathe, swallow, eat, move, develop, and all the other things we typically take for granted. It might not always be visible on the outside, but inside all of us, the mitochondria is our Power House!
We started 2008 with a trip to Cleveland Clinics and a visit with Dr. Bruce Cohen, one of the country's specialists on mitochondrial disorders. He concurred with Jacob's diagnosis of mitochondrial disorder. Jacob is today treated for mitochondrial disorder with a mito cocktail each morning and evening!
2008 was overall a good year for Jacob. We did see great progress in Jacob's development and health. Everyone who knows Jacob knows what a happy boy he is. His fat smile can make anyone smile :- We had less ER visits and ambulance rides, and could truly focus on Jacob's health, development, and happiness.
2008 didn't end the way we wanted it to do. Jacob got a bad case of pneumonia, and ended up in the hospital for an extended period of time. He developed myoclonus, which leads to shaking of his hands and body. We are trying to eliminate it with medication at this time.
2009 was a rough year for Jacob. Jacob endured 18 hospitalizations or 122 days in the hospital. Jacob developed new movement disorders, oculogyrical crises, and epilepsy. In June, we almost thought we would loose Jacob as he was septic, and spent 2 weeks in the ICU. Our boy fought through it, and had a pretty nice summer. In November, Jacob went into status epilepticus. We spent 50 days in the hospital trying everything possible to stop the seizures (and succeeded in the end). Jacob came home in time for Christmas! Despite Jacob being sick a lot this year, we got to spend a family vacation in Disney World together. We also had great visits with family. Jacob also went regularly to his school Bal Swan, and loved doing his warm water therapy. Jacob's mitochondrial disorder was also finally confirmed.
We went into 2010 not knowing, if Jacob would survive the winter. Looking back, 2010 was a pretty darn good year for Jacob. 2011 was one of Jacob's best years in a long time. Jacob stayed healthy most of the year. He went to school the whole year with very few absences. The biggest accomplishment was that we were able to clean up Jacob's seizure medications. As we reduced Jacob's seizure medications in half, we got back a lot of our "old" little boy. Jacob is today making consistent choices with his eye gaze. Jacob is shaking his head for "no", and smiling and moving his lips for "yes". Jacob is using a Big Mack (speech device) to let us know his choices. Jacob is doing "high fives" and batting objects again. Jacob is smiling. Jacob is happy. Jacob has family and friends who love him so very much. This is the place where you can take part of moments with Jacob. 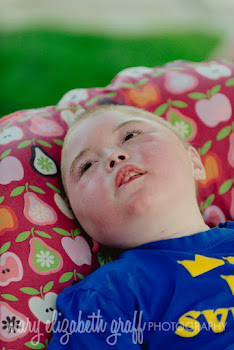